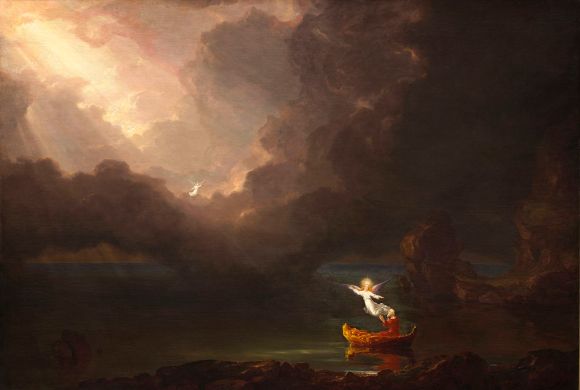 We end as we began, with Thomas Cole and a little uncertainty, now that our voyager has concluded her journey and it is time to call done-zo on this sabbatical.

Like its start, the end is hard to timestamp.  I have successfully avoided work and research and writing and most email for a whole week of “vacation” in an attempt to separate Sabbatical-land from Workville.  My new contract officially commenced on Aug. 1 but that was a Saturday, which hardly counts.  I am headed to campus, and work, for real tomorrow, Monday morning, in stockings and a dress and heels with a two-hour meeting on the calendar and buckets of email in my inbox.  That will definitely be Back At Work, which must mean Sabbatical Is Over.

Except that sabbatical activities are not all completely concluded.  In particular, manuscript/book stuff (and the inevitable screenplay, Hollywood bidding war, massive over budget film version, awards season, yadda yadda yadda) will ooze into life as a dean at my university.  The benefits of all the different pursuits of these months will linger on as well.  Probably the general sense of calm will ease away pretty fast, like novocaine from a visit to the dentist.  But the impact of all the travel, workshops, symposia, reading and writing, no doubt will last much longer; I probably only have a slight idea of what they all mean to me at this point.  So while it’s the end of one journey, it’s also the start of another.  I guess we should see the Cole cycle as that, returning back on itself to start anew.

And, speaking of that cycle thing: although I am heading back to campus with great anticipation for what’s in store, and more energy than I’ve had for a few years, I’ve already commenced counting down the months until I’m eligible for the next sabbatical–a superb gift in the voyage of academic life.

so long, for now 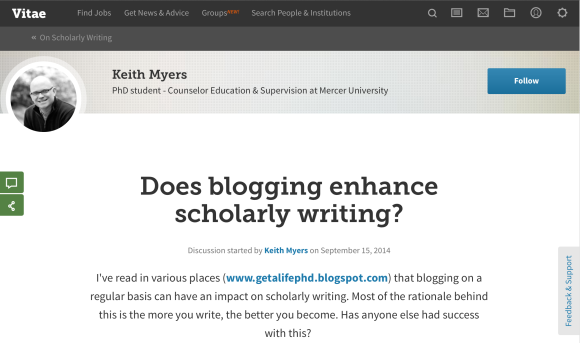 The question posed in this Vitae post is one that I think about a lot, especially now that so much of my time is (happily) given over to writing.  My immediate response is YES, in my experience my blogging has helped my writing, but on second thought: it may be that blogging helps my demeanor which helps my writing.

I suppose for some folks, blogging is a way to test drive ideas that eventually form the core of real scholarship.  And for other folks, blogging is scholarship.  For me it is a kind of serious recreation: a way to record ideas that don’t have a place in my scholarship (or teaching, or personal diary, for that matter).  It’s a place to do intentional, focused, topical daydreaming.  (Fuzzy, freewheeling, unfocused legitimate daydreaming stays in my head.)

Most importantly, blogging has been a way to keep writing when I am sick and tired of writing what I’m supposed to be writing.  Doing something thinky during scholarly dry spells, or getting unstuck on bad scholarship days, has done me a world of good since I started doing this kind of thing several years ago.

The serious-writing part of my brain is like some kind of machine that you can’t let sit or it gets gunked up.  I take it out for a spin, and sometimes actually get some place.  But if I just drive around in circles, that’s OK, too.

Going into the Last Week

All this time has been a luxury that’s really hard to give up, but it’s really, really time.  Actually, last week was supposed to be “the end” but I haven’t quite made it to the finish line with my big project.  Luckily I still have two weeks before officially reporting for duty, so this week will be dedicated to swerving around those good-but-not-the-point things and focusing on the manuscript submission. I suppose this is not a unique feeling, the sense that I could easily spend another month, or year, polishing it, but also getting at the end of my rope, on my last nerve, and just slightly sick of it.  It’s got to go.

So with some excellent encouragement from Tom Hiddleston, here we go.  Today is not the time to stop, but Friday is.

time until the next sabbatical